Edward weston is one of the most recognised of all american photographers. He is probably the most responsible for helping people to see photography as an art form. He did not always use his camera to take pictures that way. At first he took pictured influenced by the popular photographs of his time. Photographers then made pictures that did not appear sharp and clear. Instead, they appeared soft. They were similar to painted pictures that tried to be beautiful, not realistic. Since someones passing, his 6 children have taken taken over his website. 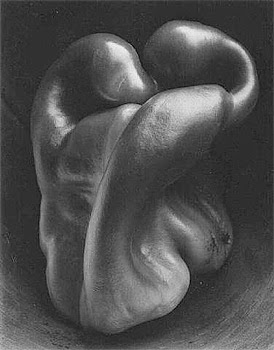 Pepper #30
I think he's using a long shutter speed on these photos to bring in some details to the photo. 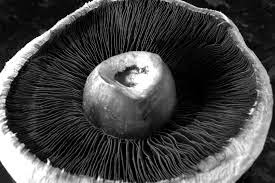 toadstool
Above is a negative image which was produced in the dark room.

He used an 8 1/2 in. lens for all his extreme close-up work on his 8x10. He found that he actually needed more DOF than the smallest f stop his 8 inch lens shutter would provide..so he cut from a black piece of tin a smaller hole,similar to a Waterhouse Stop,to give him even more Depth of field,which he in turn placed in the shutter. If there's a will there's a way!

Email ThisBlogThis!Share to TwitterShare to FacebookShare to Pinterest
Labels: whites